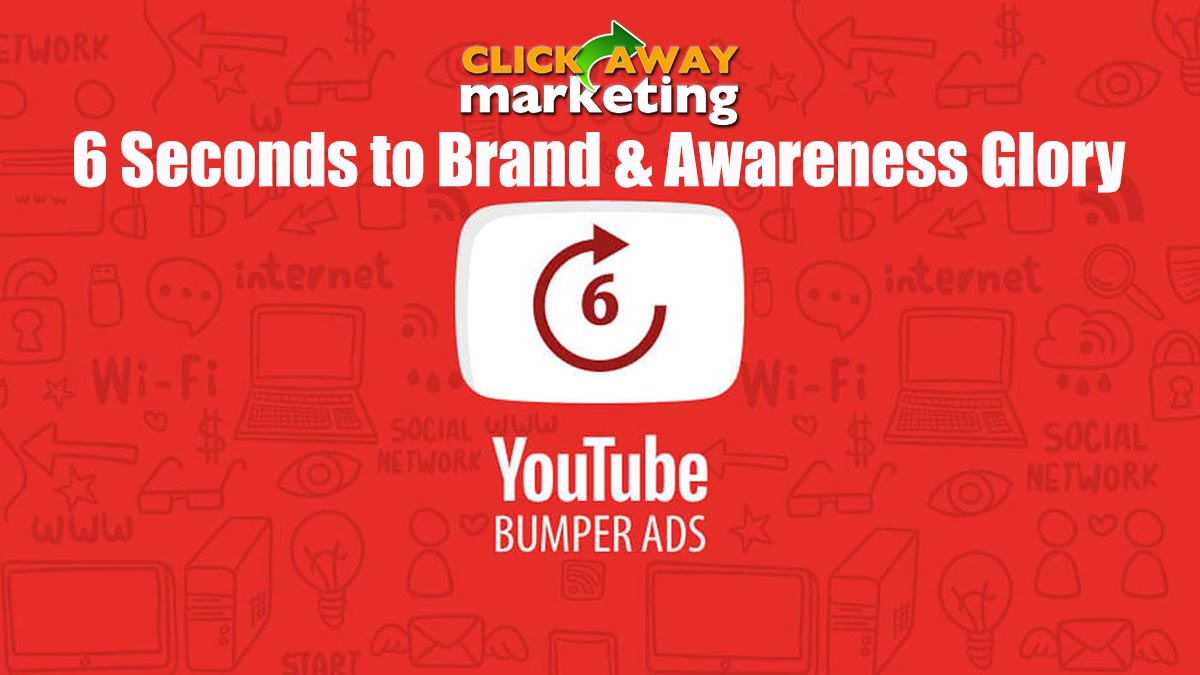 A fantastic tool to throw into the mix when you are considering cost effective ways to reach large audiences with your brand message to raise awareness of your product or service are YouTube bumper ads. By leveraging this short form video ad format, you can drive home a simple message (or a series of simple messages) to a wide audience inexpensively, while also generating a little traffic to your website along the way.

YouTube’s bumper ad format is a six (6) -second video ad that plays before a YouTube video. The bumper ad is un-skippable, so your entire message will be shown every time your ad is played for a User. Due to their very short, impactful length, bumper ads are best for creating brand awareness and reach.

In contrast, other YouTube ad formats like overlays, skippable, and non-skippable video ads are better for longer ad spots that dive deeper into product features and benefits as well as customer testimonials and other more complex messaging.

Bumper ads can run as standalone ad campaigns, although Google recommends running them in combination with TrueView Ads to increase their effectiveness (ex. Showing TrueView ads to first-time viewers, and then continuing to show those same viewers bumper ads to increase frequency of exposure to your brand’s message).

In either case, whether you are running your bumper ads alone or as a compliment to another YouTube campaign, your bumper ads should be set up as their own campaign in your Google Ads account in order to control the campaign delivery and other metrics.

YouTube bumper ads operate within a cost-per-impression (CPM) bidding pricing model, so you will be charged per 1,000 impressions of your ads.

Like all PPC “auction-based” pricing, exact pricing will vary based on targeting and competitiveness. However, in order to control your investment, you can set a daily budget and a maximum CPM to ensure you don’t spend more than you want on your YouTube bumper ad campaign.

In a 2017 study, bumper ads were found to effectively drive upper funnel results. In the study, Google looked across 122 bumpers campaigns in the US and found that 70% drove a significant lift in brand awareness, with an average lift of 9%.1 On ad recall, YouTube bumper ads performed even better – over 9 in 10 drove ad recall globally, with an average lift of over 30%.2 Given their high success rate and ease of use, bumpers can be a great building block for your YouTube campaigns.

A Few Creative Tips for Building Your Bumper Ads

When you are developing your bumper ad campaign, it’s best to focus on a single point — one single objective.

For example, if you sell a pair of sunglasses, you might focus on the unique material your frames are made from.

Don’t overcomplicate things by trying to stuff too many selling points into one ad – instead, you might consider creating a series of single-message ads that tell your story more comprehensively over time as viewers see the variety of them online.

In addition to a single objective, you should also try to keep your ad’s visuals as simple as possible. Too many visuals, cut scenes, or overwhelming text will be distracting and hard to follow in such a short time span.

• Start your video with a bang

Beginning your ad with a striking visual, and impactful sound, or a funny moment can be a great way to quickly capture the viewer’s attention.

Some advertisers can be tempted to cut down their 30 or 15-second video ads to fit the six-second format. However, this effort may not always translate, and the ad will likely come off as confusing or incomplete. Instead, create your ad from start to finish with a 6-second message in mind, and convey it completely.

Let’s take a quick look (about 6-seconds quick!) at this campaign from Samsung, promoting their Galaxy S8, which was ranked number one by YouTube in a survey of internal global data from April to July 2017. YouTube stated that rankings were determined via an algorithm that factored in organic views, click-throughs, and user creative ratings.

What this Samsung ad does well:

How this Samsung ad could be improved a little:

While excellent, the video doesn’t include any narration. That means the ad could miss viewers who have not turned their attention to the video yet (multitaskers, opened the video in another tab) or are simply listening to the video’s audio. By adding narration, the video could reach everyone’s attention while it’s playing.

When executed properly, YouTube bumper ads are a cost effective way to drive significant brand awareness and website traffic for your product or service. When you couple the impactful creative format with YouTube’s powerful targeting options including demographics, audiences, keywords, topics, and placements, you can deliver your 6-second message right at your market.

The Organic Challenge for Startups: Nobody Knows to Look for You

Step-by-Step Guidebook for Getting Your Business Online

You run a business. So Where Do You Start Online?

Let us help you get the most out of your Google Business Listing - one of the most powerful, free tools you have to drive business awareness, site traffic, foot traffic and phone calls to your local business.

Want to be the first to know when new videos available? Subscribe to our email newsletter. We'll never, ever SPAM you - unsubscribe at any time!

Manage Cookie Consent
To provide the best experiences, we use technologies like cookies to store and/or access device information. Consenting to these technologies will allow us to process data such as browsing behavior or unique IDs on this site. Not consenting or withdrawing consent, may adversely affect certain features and functions.
Manage options Manage services Manage vendors Read more about these purposes
View preferences
{title} {title} {title}
Skip to content